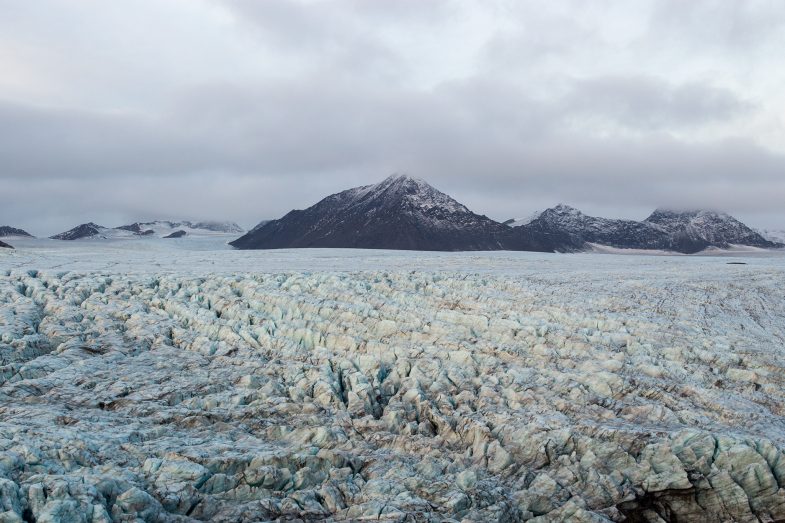 After anchoring at Gipsvika our plans to sail North continued to be scuppered by the elements and so we had to turn back into Isfjorden – as we had tried to sail out of the fjord there had been a strong swell from the south west that caused the ship to heel 30 degrees or more!

So instead of sailing North we dropped anchor at a place called Ymerbukta. Rather than settling down to work in front of the glacier as we had done previously, the guides took us on a short hike up alongside the glacier. It was fantastic to be able to get up really close to the glacier. It gave us opportunities to better appreciate the scale of these masses of ice and the shapes and forms within them.

Whilst we hiked up along the side of the glacier we didn’t encounter the ‘cliffs’ of ice that were present at the front but the huge chucks of ice that we encountered were still impressive enough to have us all in awe. The patterns within the ice were absolutely beautiful and the contrast of the glowing ice against the dark brown moraine simply served to further enhance our vision of this mass of ice.

The sounds of the glacier were just as mesmerizing as the sight of it. Up close we could here streams of melt-water trickling down towards the fjord, constant little cracks as the ice ‘popped’, and every now and then a thunderous rumble as a piece of the glacier calved somewhere in the distance.

As you might imagine I produced a lot of photographs, drawings, and notes, from my encounters with glaciers. However, none of these really convey the overwhelming scale and colour of them. The glaciers were luminescent shades of blue that simply get flattened in the photographs and it’s hard to describe just what colour they were. After having enjoyed a morning hike along the glacier we made land on a spit of land just in front of it in the afternoon.

Up until now I had spent the majority of the landings capturing what I could of my experience of, and encounters with the landscape through drawings and photographs. However, this afternoon I had stretched up some cotton across my embroidery frame ready to stitch the landscape.

I’ve never taken my embroidery out into the landscape like this but it was a fantastic experience. Though the sub-zero temperatures did mean that it was hard going and I had to take fairly regular breaks to keep warming my hand up – it’s just not practical to stitch with thick arctic gloves on!

I had managed to hunker down and find myself a spot that was generally well protected from any arctic breezes and so despite the cold I actually managed to get a fair bit of embroidery done.