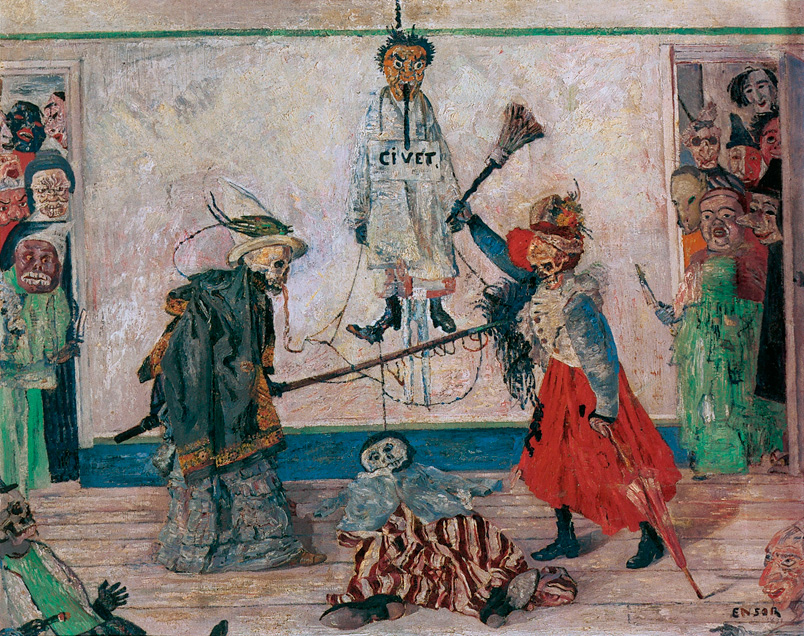 I’ve been a fan of James Ensor’s work since I discovered his work during art classes at school. He is especially known for his use of allegory and satire, as well as some of the carnivalesque and macbre elements within his later work.

It’s these macabre and carnivlesque themes that work together to imbue Ensor’s paintings with a dark humour. For example, in Skeletons Fighting Over a Hanged Man (1891) [pictured above] we are confronted with two skeletons dressed like old women in a tussle centre staged as masked onlookers encroach from the edges of the painting. If it wasn’t for the omnipresent theme of death in this image one could imagine how this scene might be straight out of a sitcom.

The gloom that might typically accompany an image in which death is so prevalent is offset by the bright and bold palette that Ensor typically uses combined with the energy of his apparently dead subjects. Who knew that skeletons had such vim and vigour!

It might depend on your point of view, but personally I find that the macabre themes in the image intensify the absurdity of the scene and deepen (as well as darken) the humour too. 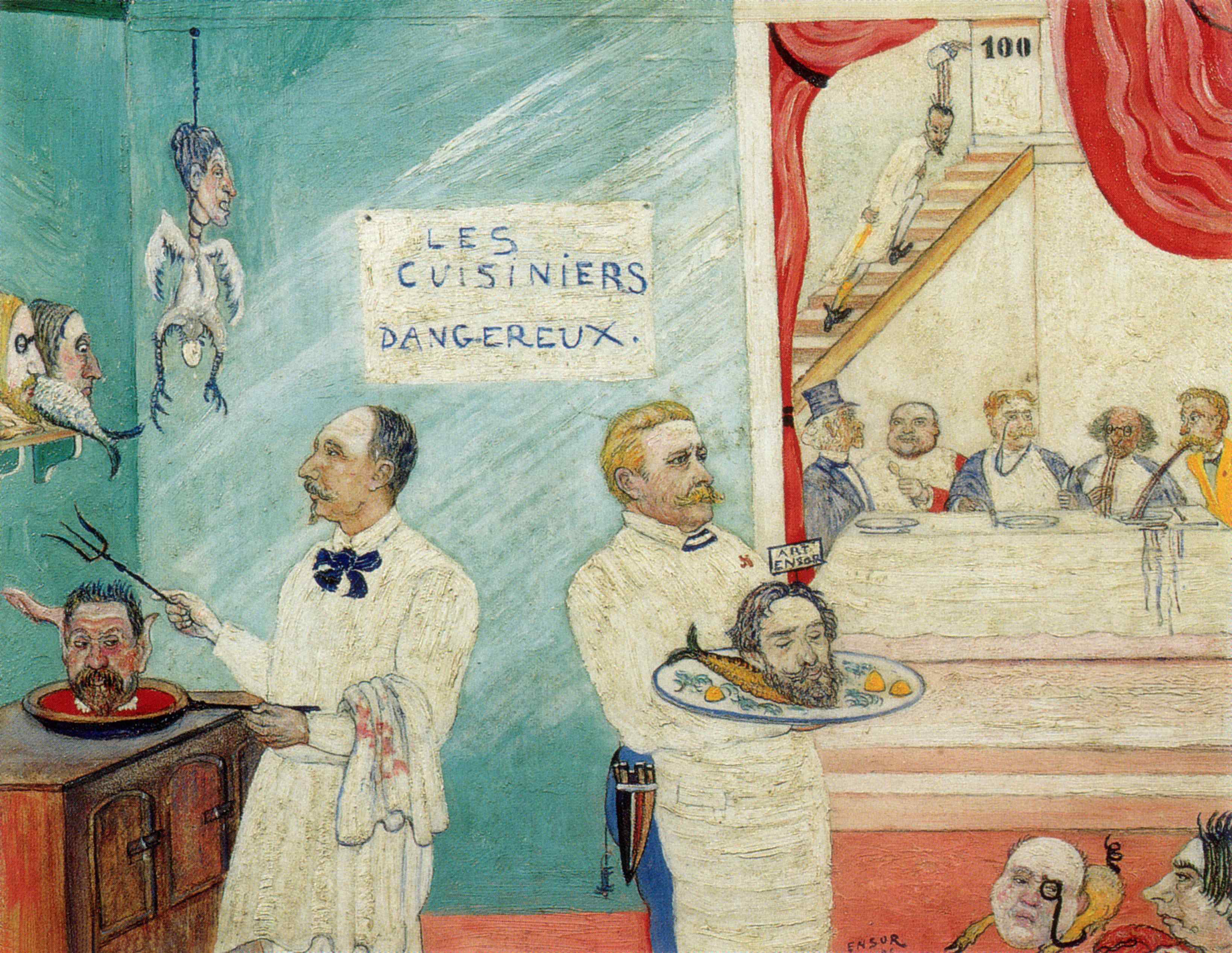 The Dangerous Cooks (Les Cuisiniers Dangereuses) [pictured at the top of the page] is a painting by Belgian artist Ensor that was created in 1896.

Unlike some of Ensor’s more carnivalesque paintings The Dangerous Cooks does not feature masked participants as the painting is a response to Ensor’s own frustrations at the art world at that time. As such it is important that we can see the faces of those characters in the painting in order to understand what it is that Ensor is trying to convey.

For instance, the head on a plate being served up at the heart of the painting is that of Ensor himself. The men sat around the table in the background, to whom Ensor’s head is apparently being served, are notable art critics from the period including Edouard Fétis.

The painting was created a couple of years after the Les XX group was disbanded. Les XX (The Twenty) was a group of twenty artists that was established in 1883 by entrepreneur Octave Maus and Ensor was one of the founding members.

Ensor had a number of disagreements with Maus, as secretary of the group. For example, the group would invite external artists to exhibit alongside them at their annual exhibition, some of whom Ensor objected to. Whilst he successfully opposed some of these invitation others were supported by other members of the group.

One such instance saw the Les XX group invite Georges Seurat to take part in their annual exhibition – an artist whose work Ensor loathed. Ensor was overruled by other members of Les XX and Seurat exhibited as a part of the Brussels Salon.

The Dangerous Cooks painting is a response to these fractious disagreements that Ensor had with Maus and other members of Les XX during his time as a part of the group. In fact the man depicted serving Ensor’s head up on a plate is Octave Maus, and other severed heads around the painting are representative of other members of Les XX; Anna Boch, who was a keen advocate of Seurat’s inclusion in their salon, is depicted here with her head atop the body of a plucked chicken on the wall to the left.

I rediscovered Ensor’s paintings recently as I was rereading some materials around the carnivalesque. It was it this point that I re-encountered The Dangerous Cooks. Needless to say the cannibalistic content piqued my interest.

Works of art featuring cannibalism can all frequently take us to a dark and grisly place as in Goya’s take on Saturn Devouring His Son but with Ensor’s characteristic humour this painting stands out from other cannibalistic artworks. It is Ensor’s satirical tone that has inspired some of my own work.

Some embroidered works that I created earlier this year in response to the UK governments u-turn regarding their decision to provide free school meals to children during the pandemic were directly inspired by The Dangerous Cooks. Chiefly it was the imagery of a severed head on a plate being served up that I used as a means through which to respond to the story as you can see in the images below.

In the words of Rousseau “When the poor have nothing more to eat, they will eat the rich!”. So with that in mind let’s make them the dish du jour!