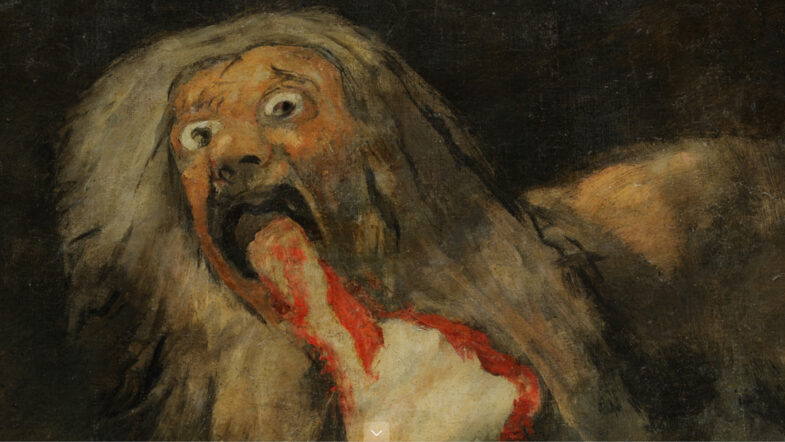 When it comes to images of cannibalism in art Saturn Devouring His Son is perhaps the most well known painting that comes to mind. There are in fact two well known versions of this scene that have been painted and depending on your aesthetic interests you may be familiar with one rather than both of these.

One work was painted by Flemish Artist Peter Paul Rubens in 1636, the other by Spanish artist Francisco Goya, was painted sometime between 1819 and 1823.

Goya’s version of Saturn Devouring His Son is my personal favourite of the two paintings. I feel it’s a much more visceral illustration of this violent scene. There’s a ferocity with which Saturn is cannibalising his son which Goya has managed to capture.

It is one of a number of Goya’s paintings that are referred to as the Black Paintings. These were large mural paintings that were originally painted directly onto the walls of his house outside Madrid sometime between 1819 and 1823. The paintings in this series are haunting and many are somewhat morose. Interestingly though there is little connecting these Black Paintings beyond the aesthetic approach and a wide range of different scenes are are depicted across the series.

Having lived through the Napoleonic war and survived two near fatal illnesses it’s believed that towards the end of his life Goya lived in fear of going insane and that he had developed an embittered view of humanity. The Black Paintings are thought to reflect this mindset and and are inspired by some of the cruel and tragic events that he witnessed during his lifetime.

As the works were originally painted on the interior walls of Goya’s house they were never intended for public consumption, and thus they weren’t contextualized or titled by the artist. The title of Saturn Devouring His Son was given to this particular painting after his death.

It’s not hard to see why this painting was identified as Saturn Devouring His Son as it bears a very similar compositional likeness to Ruben’s painting from two centuries earlier. Whilst the characters are facing opposite ways to one another both are similarly hunched over within a tall portrait canvas.

The Story of Chronos

Saturn overthrew his father to become the ruler of all the gods. However, he became fearful that history would repeat itself and that he would be overthrown by one of his own children. As a result he ate five out of his six children shortly after they were born. His wife hid his sixth son, Jupiter, as soon as he was born and he was indeed able to grow up to overthrow his father.

Eating features heavily in mythological tales and reflects the significance of feasting within ancient Greek culture.

And whilst feasting is frequent in literature from the time, cannibalism is also rife. For example, Odysseus struggles against cannibals, Atreus kills his brother’s children and serves them to him at a ‘reconciliation’ feast, and in another story Procne kills her son, Itys, and serves him to her husband as revenge for his crimes against her sister.

Cannibalism is often served up in these stories as an act of revenge as in the case of Procne and her husband Tereus. In other stories such as The Odyssey cannibalism is used to distinguish between those who are civilised or savage.

Whilst the title for Goya’s work was attributed after his death Goya himself never spoke about the work and some observers believe there to be discrepancies between the painting and its title referring to the tale of Chronos.

For example, on closer inspection it could be argued that the body being consumed by the Saturn-like character in Goya’s painting is that of a female rather than male.Some critics have argued that the body is actually that of an adult not a child. This reading of the painting is supported by a red chalk sketch that Goya produced which depicts an old man Saturn devouring two figures which are clearly men not children.

Whilst the structural similarities between Goya’s and Ruben’s paintings are clear to see with the Saturn character hunched over and feasting it would seem that Goya’s work is perhaps an allegorical piece that was trying to convey something other than a literal illustration of the tale of Chronos. Goya was known for using his artworks to convey political commentary and some experts have suggested that the his painting of Saturn Devouring His Children could in fact represent the Spanish state consuming its own citizens, or Napoleon devouring his own soldiers.

Goya’s true intention with regard to this painting will never be known now but it’s a horrifyingly unique painting that has captured the imagination of many.

Goya’s painting has been a key inspiration in amongst my cannibal studies as you might imagine. This has both been in terms of the general cannibalistic theme as well as the possible political edge that might be read into the work.

For example, a number of my drawings of people eating people share a similarity in terms of the composition with a figure cramming another into their gaping mouth. Additionally my embroidery of Trump, which was produced in response to his violent reaction to peaceful protesters, was inspired by the potential political readings of Goya’s painting.

Goya’s painting was transferred from the walls of his old house onto canvas some time ago and it is how housed in the Museo Del Prado in Madrid. You can find out more about the work via the museum’s website here.

Rubens’ painting is also held at the Museo del Prado.