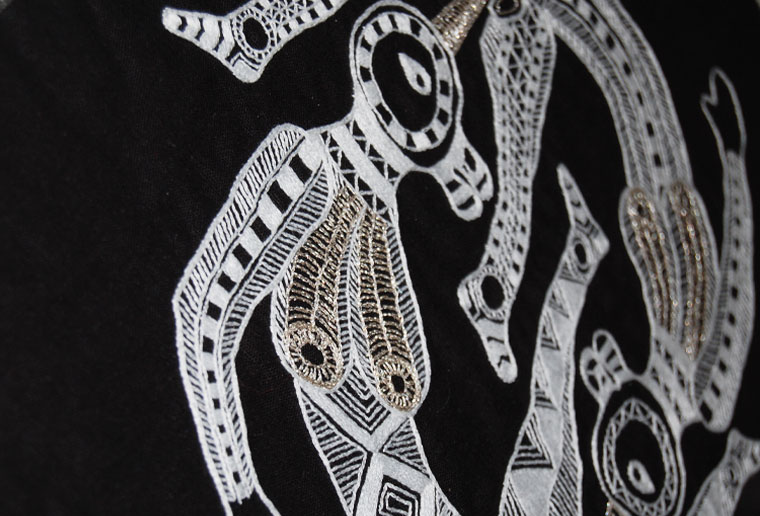 MK Embroiderers Guild (MKEG) is Milton Keynes’ local branch of the nation’s leading craft organisation. For the exhibition, the MKEG have challenged their members to represent ‘Milton Keynes in an eight-inch square’, to create small, needle and thread portraits of their favourite places in the city. The results constitute a real celebration of the city in stitch. In addition to work by the members, the exhibition includes a number of rare and significant pieces on loan from national collections, including such luminaries from the embroidery world as Rebecca Crompton, Rachael Thompson, Julia Caprara and Beryl Dean.

In contrast, the work selected by Jamie Chalmers, an active leader in the “new embroidery movement” is far from “Hemmed In”, either in scale, media or content. Chalmers aims to bring the world of cross-stitch and embroidery to a new audience and to restore embroidery to the heart of the art world. The works on view at MK Gallery will offer an expanded, radical and alternative view of contemporary embroidery from stitchers across the world, and demonstrates the unusual directions it is taking internationally. It will include an embroidered car door from Severija In?irauskaité-Kriaunevi?iené from Lithuania, Erin M. Riley’s Shotgun tapestries and Tilleke Schwartz’s hand embroidered masterpieces.

Although contemporary artists today work across a wide range of genres from video to textiles and photography to sculpture as exemplified by artists such as Grayson Perry and Tracey Emin, the exhibition charts the evolution, throughout the twentieth century, of embroidery from domestic decoration to high art.