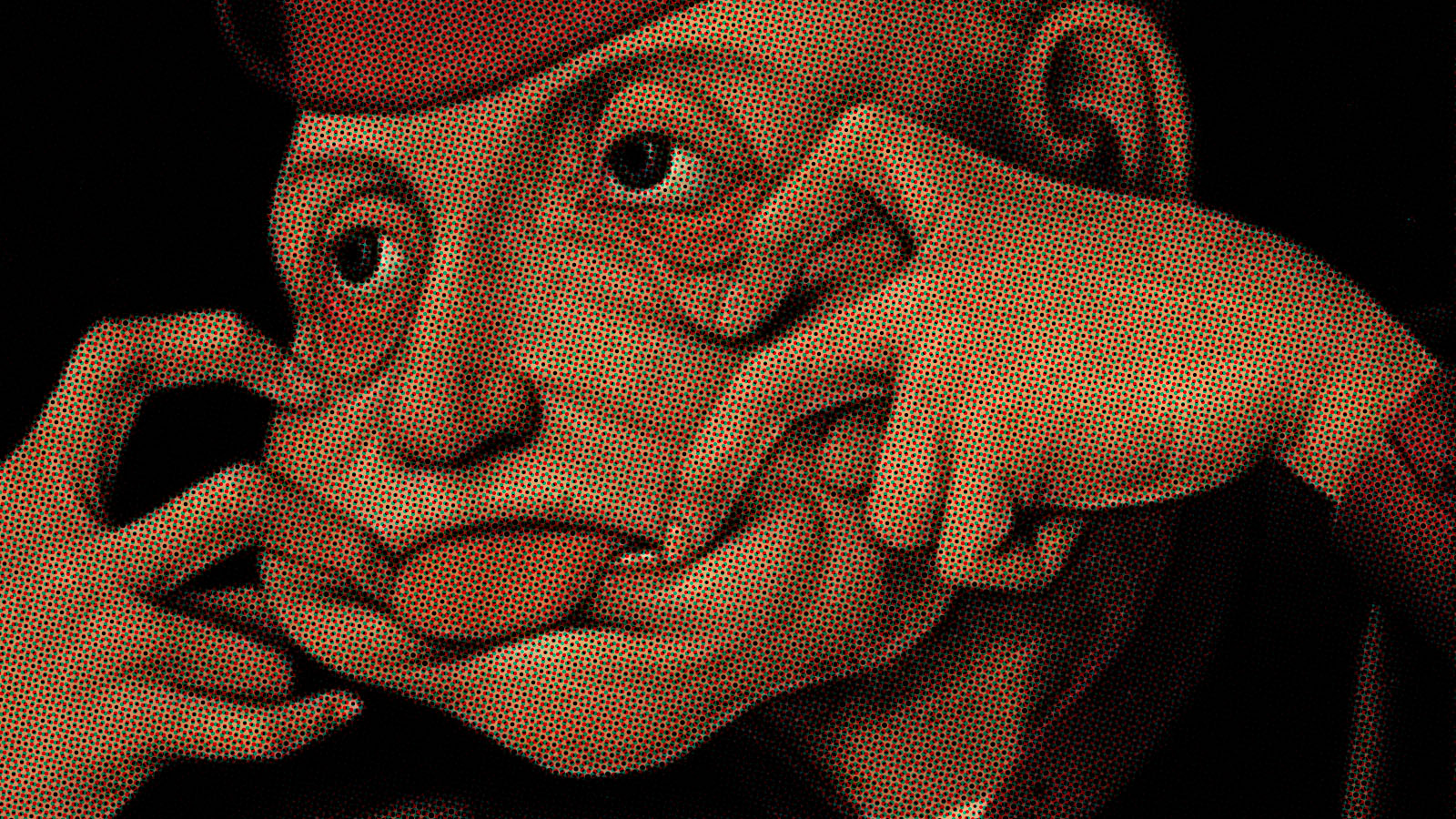 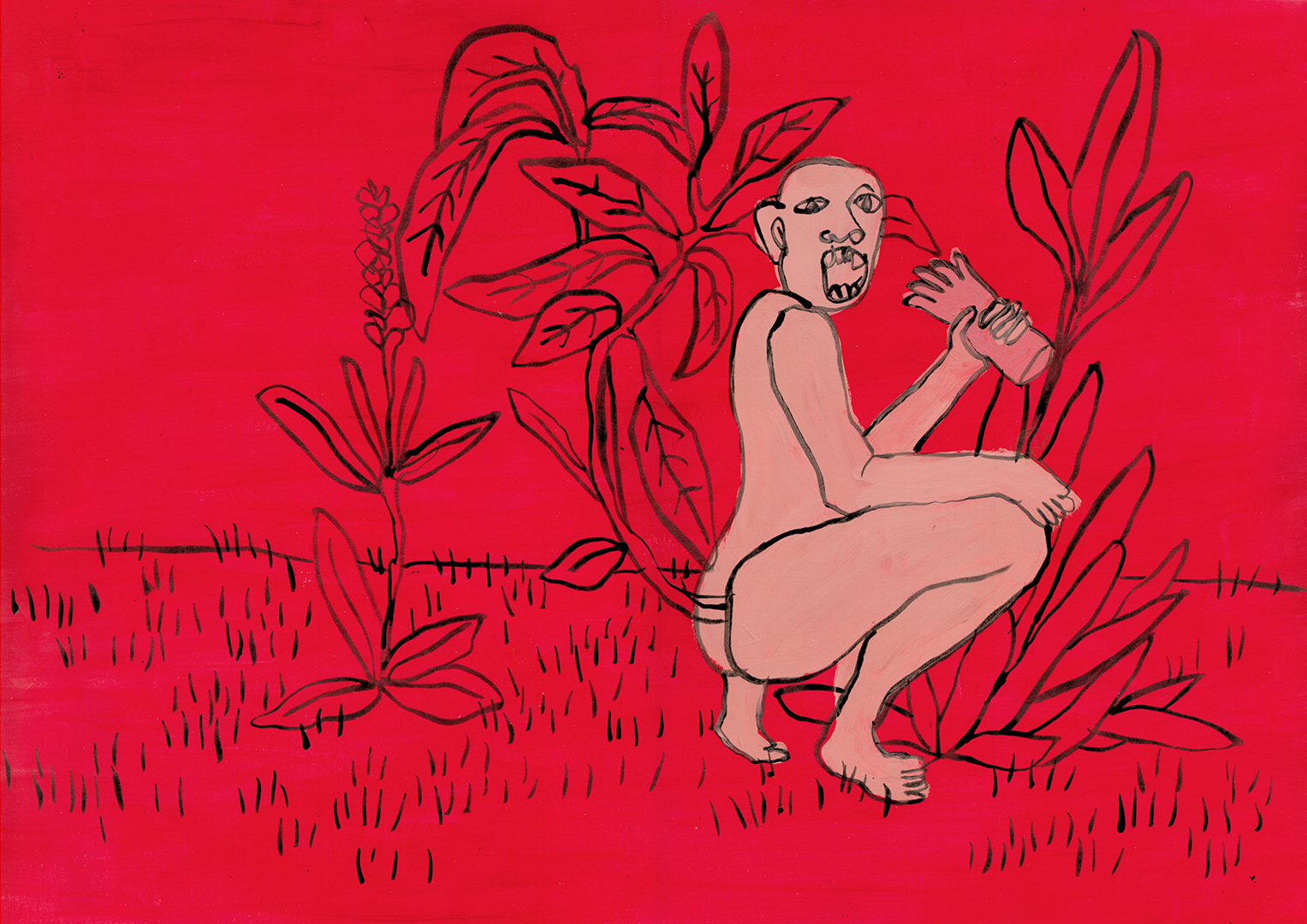 If you have seen some of my recent work you can’t help but have noticed the flora sprouting from the anuses of the characters in my drawings (as pictured above). As with much of my previous work the absurd imagery and inferences in these works are inspired by ideas related to the Carnivalesque.

Whilst I’ve looked to the Carnivlesque for inspiration before it was really interesting to me to discover the etymology of the word carnival whilst working on my recent cannibal studies.

The word carnival is thought to be of Christian origin and derived from the Latin phrase “carne levare” which translates as “farewell flesh”. This was not of course with reference to the cannibalistic consuming of one another as in my recent drawings but instead a reference to the forthcoming fast and carnival represented the last period of feasting up until midnight on Shrove Tuesday.

Many of the artists who I refer to for inspiration, such as Francisco Goya and James Ensor mentioned in previous blog posts, are associated with the Carnivalesque.

The catalyst for my images of people sprouting flora from their anuses was twofold. The spark was ignited as I was reading the most wonderfully titled essay “Closing the Loop: excremental entrepreneurs, eco-anarchists, and urine harvesters” by Barbara Penner (2019) whilst at the same time serendipitously reacquainting myself with a satirical diptych by an anonymous Flemish artist from the sixteenth century pictured below. 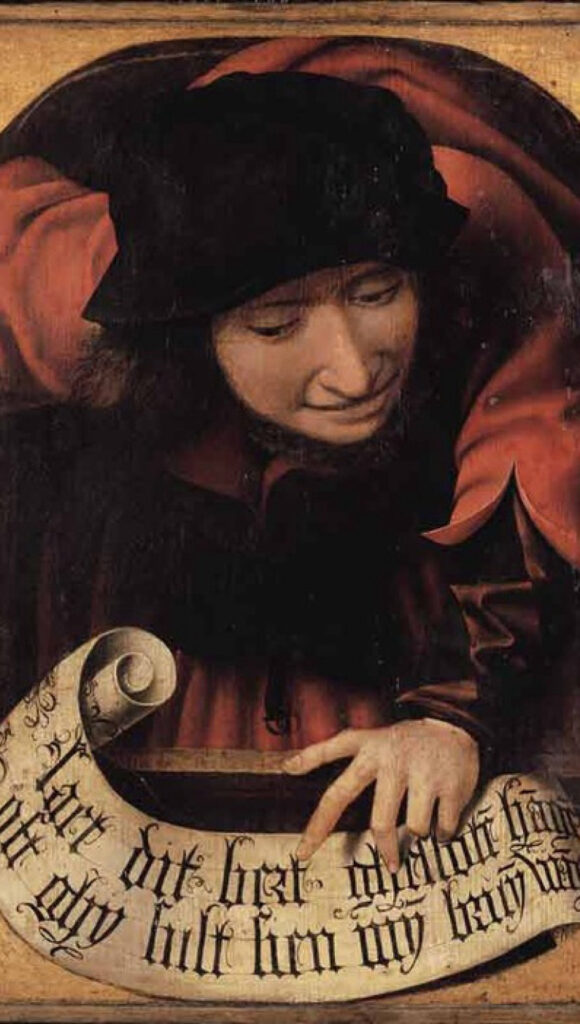 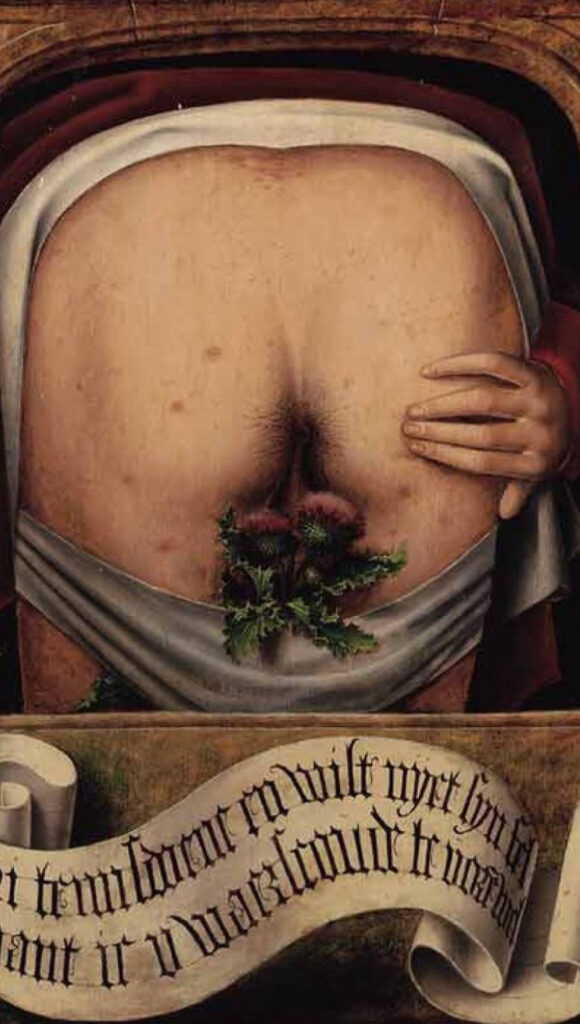 The diptych is actually designed so that the portrait of the man holding the scroll sits hinged on top of the second painting. I’m led to understand that the scroll implores us to leave the diptych shut. But of course our curiosity gets the better of us and we open the diptych to be confronted by his spotty bare buttocks. In his lowered pants are some thistles through whose leaves we are treated to a glimpse of the guys scrotum.

The scroll on the second panel roughly translates as ‘Don’t say you weren’t warned’.

In his essay “A Carnival Sense of the World” (2000) Timothy Hyman explains how this painting relates to the riotous world of Carnival being “emblematic of the liberty of the imagination; as an ideology of unbuttoning”. The painting encapsulates the mischief that is often associated with carnival as well as the veiling/unveiling of chaos and disorder.

Penner’s essay, “Closing the Loop” discusses the experimental ways in which designers, artists, environmentalists, and activists have been trying to tackle the problem of human waste emphasizing the processes of recycling and recovery.

She states that “The culture of ‘flush and forget’ reigns supreme, reinforced by the triumphalist histories of the victorian era, in which the rise of sewerage is held up as one of it’s greatest achievements”. But she reminds us that sewerage is the product of a particular technology and not a direct product of the human body.

“For some time we may have thought that the U-bend in the toilet was a convenient curvature of ontological space that took whatever we flush down it into a totally different dimension called Away, leaving things clean over here. Now we know better: instead of the mythical land Away, we know waste goes to the pacific ocean or the wastewater treatment facility.

In her essay Penner details a few different example of projects in which people have tried to close the loop between production and consumption. For example, Peter Caine and the Street Farm collective built one of the earliest Eco-Houses in London in 1972.

The Eco-House was built as a living experiment. It was a fully functional, integrated system that converted human waste to methane for cooking, and fruit and vegetables were grown in a hydroponic greenhouse. For two years, Peter Caine’s family were a part of the digestive loop of the house. 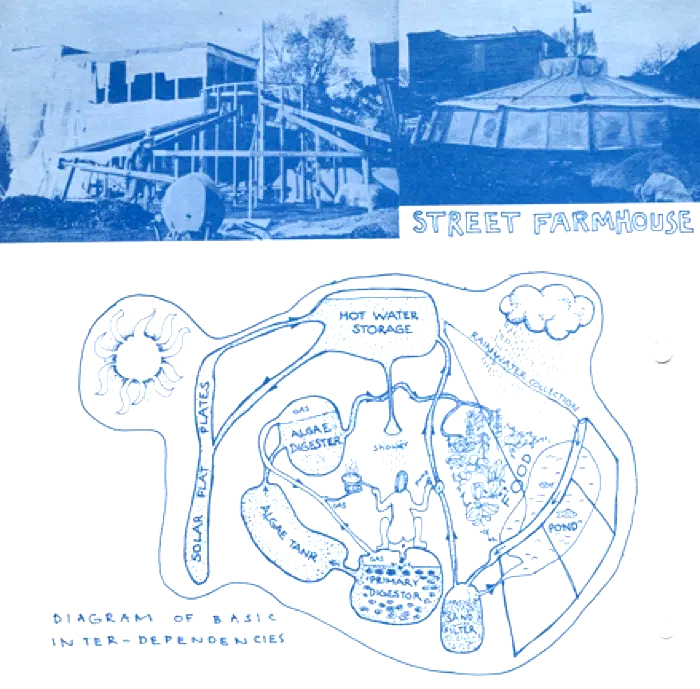 The image above shows a hand drawn diagram that illustrates the basic inter dependencies at play within the eco-house.

It was having cogitated on that flush and forget mentality, the case studies cited by Penner, and the imagery contained within that Flemish diptych that I decided to start depicting the figures in my work with flora sprouting from their anuses.

I was also reflecting back on some of the materials on cannibalism that I have read, in particular Bill Schutt’s survey “Eat Me” in which he reminds us that we humans are,a part of nature, not apart from it.

My work recently has been responding to the role of food, and more broadly our consumption, as contributing factors to the climate crisis. However, I can’t respond to the idea of consumption without giving consideration to the resulting waste.

These strands of thought were starting to become entangled and if my work is being produced under the premise that cannibalism is a viable solution to the climate crisis, and factors such as over-population and animal agriculture, then I should also be considering what sustainable cannibalism might look like!

We need to turn waste into treasure and return all that we consume back into the nutrient loop.

Below are some of my drawings of my excremental adventurers. 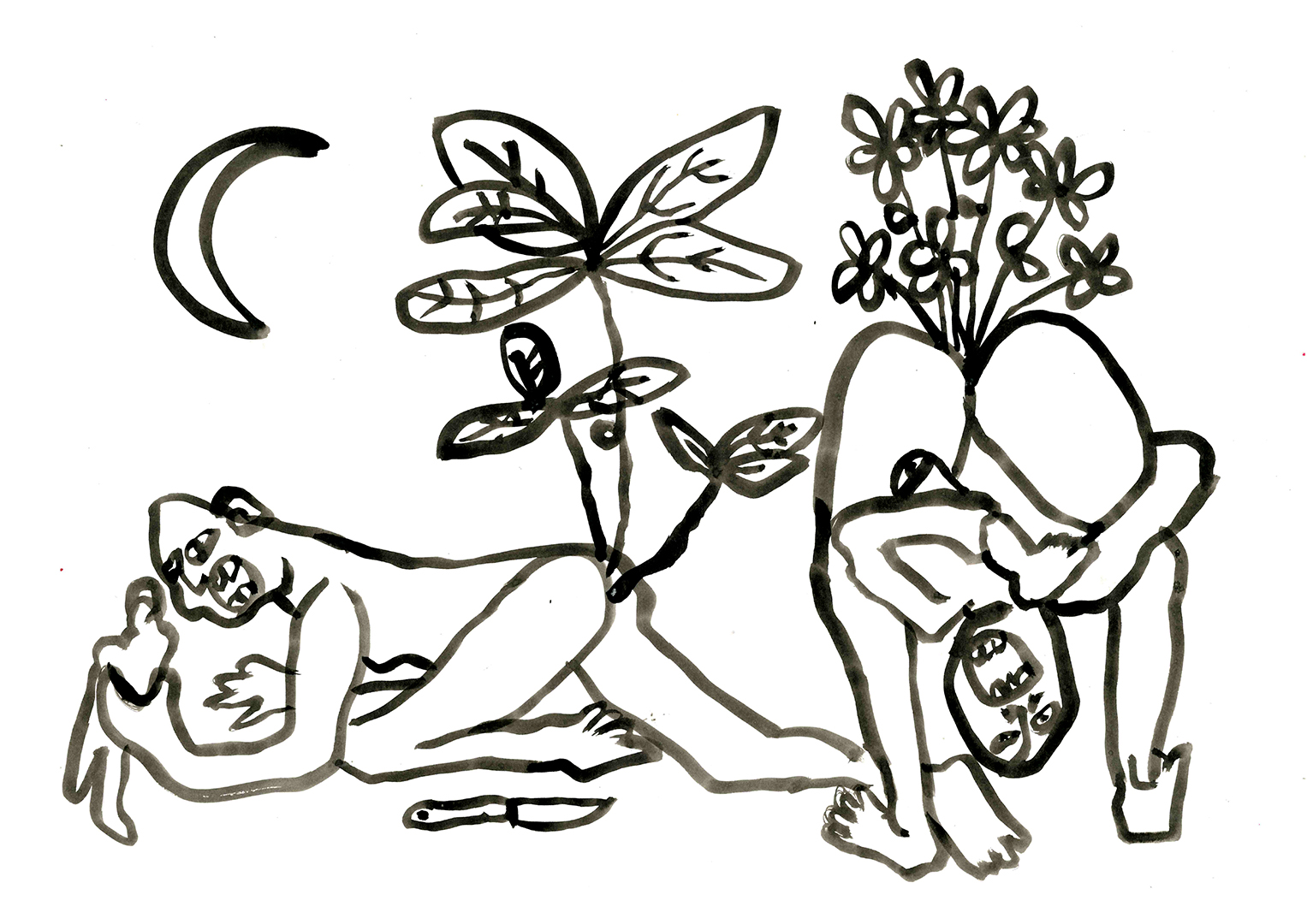 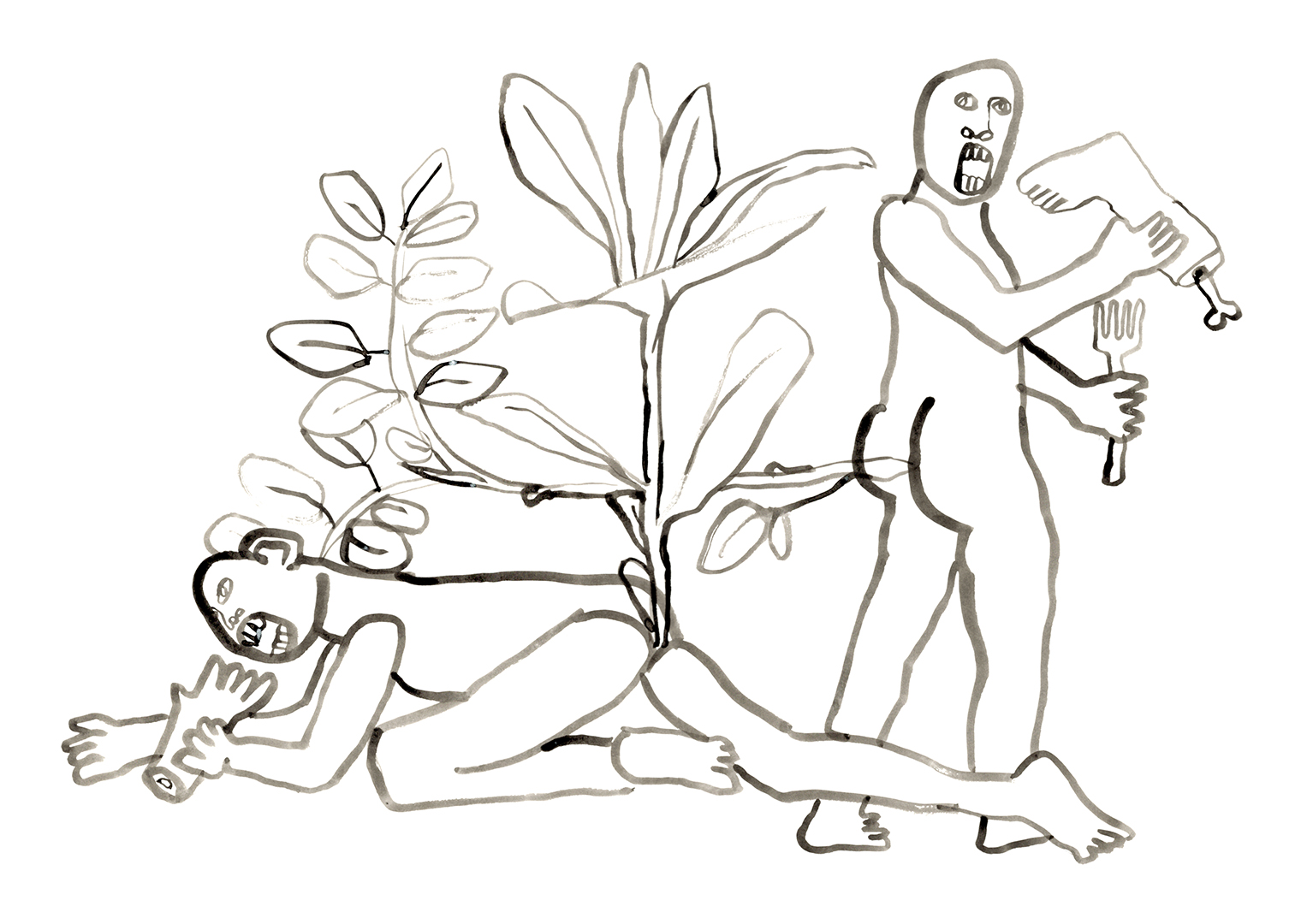 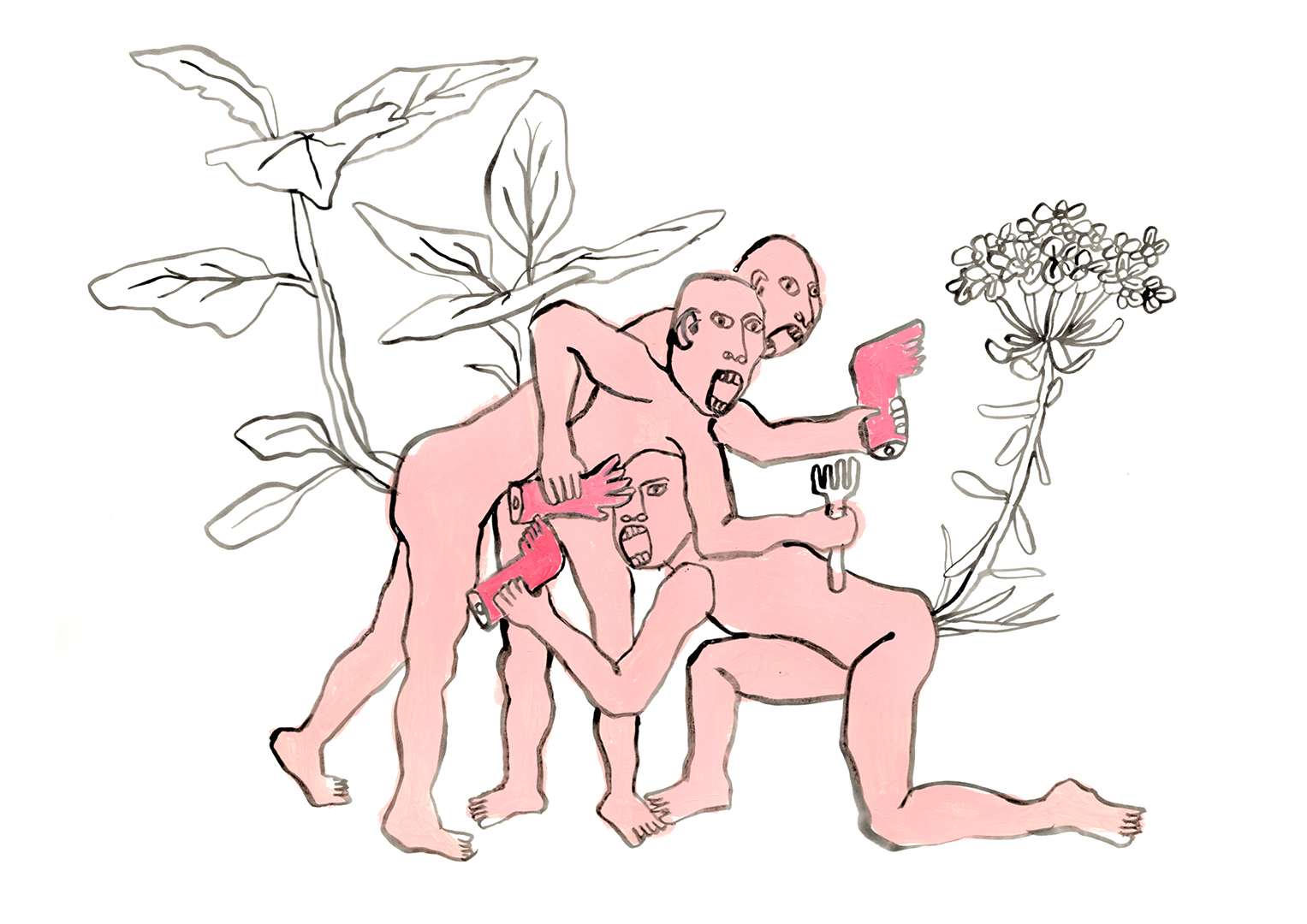 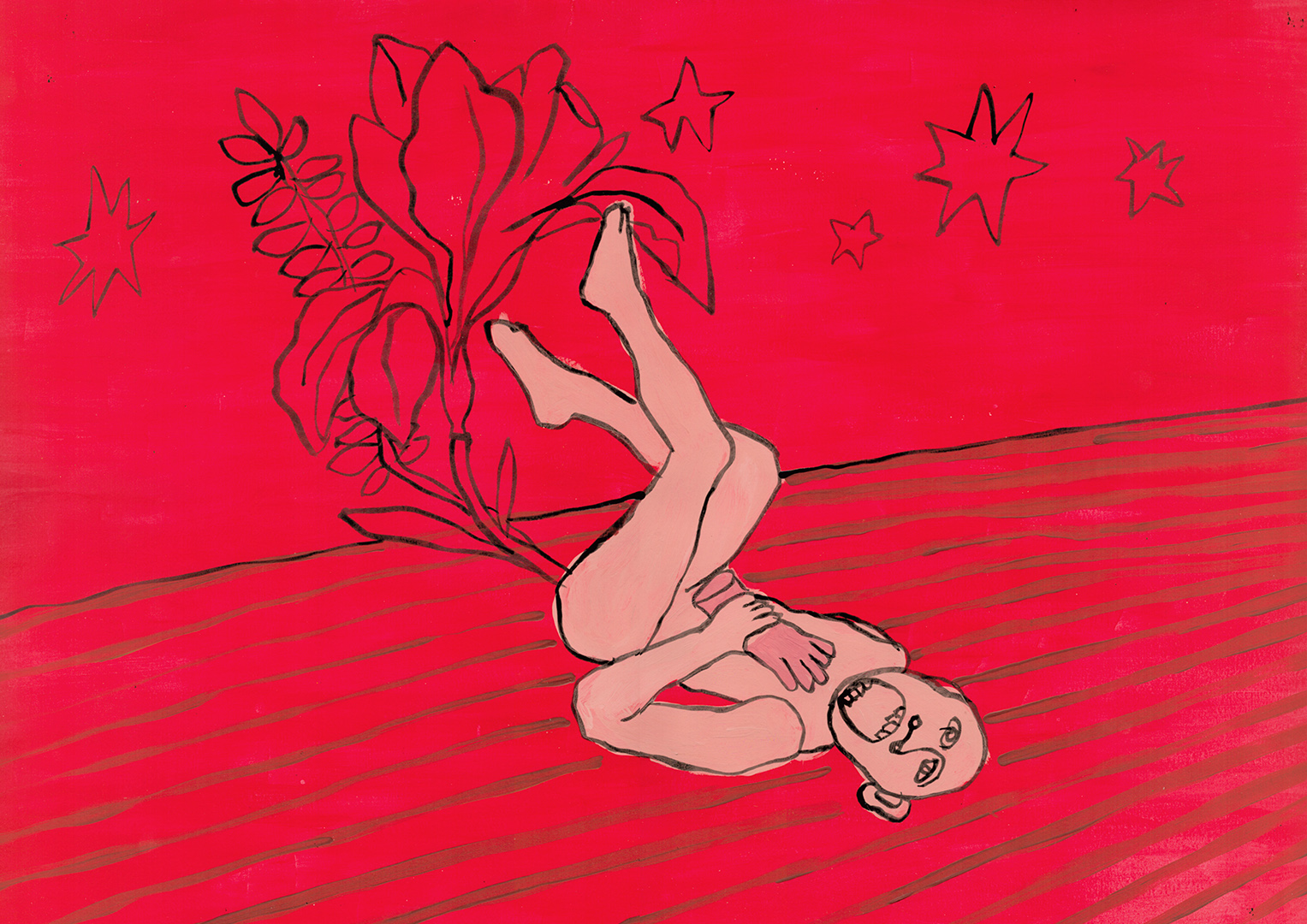