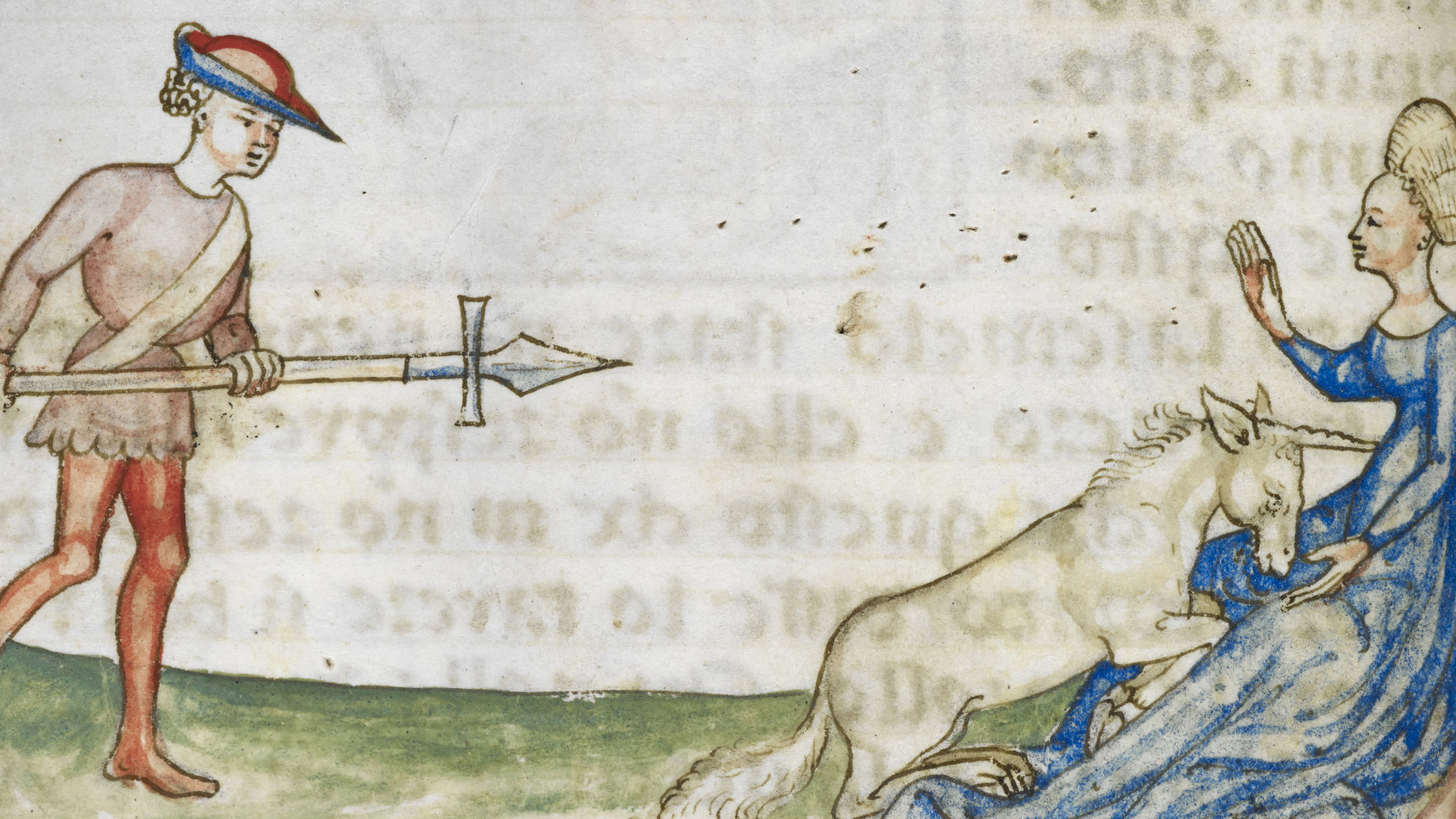 The Unicorns do not understand.

We have had long conversations but it is difficult for them. They insist that I have come to collect the body of one of their number, but at the same time they point out that there is no body, that it was collected by another man before I arrived. They continue to insist on these points, laughing that I have come for something that is not there.

I have asked them why they think that I could only have come for one reason, and they have replied that this is the way it has always been; that men come, like vultures, when there has been a death, to take care of the body.

I have suggested to them that men are cruel, but they have denied this, saying that men perform their God-given tasks efficiently. The men, they say, cannot be held responsible for the death of unicorns.

I mention guns. But they have no knowledge of guns, or, it turns out, of weapons of any sort. So I describe for them the deep trench that runs across the top of the ridge. I describe the parking lot behind the trench and the cars that arrive, filled with men and guns. They have no idea of the nature of cars or their purpose – this is a red herring and I do not answer their questions about the nature of cars. I explain instead that the head of a unicorn is greatly prized by men who pay three thousand pounds for the privilege of shooting one. I explain how the men climb into the trench and wait for the unicorns to run across the moor.

When I return to the subject of guns the unicorns laugh, tossing their heads high and falling about the cave. And their leader, Moorav, smilingly warns me against blasphemy, saying that only God has the power to take life.

He tells me then how in the early days the unicorns lived for ever, being revered by both men and animals, and having no natural enemies. He says, however, that this was in pagan times, before God came into the word. God, he informs me, bestowed upon the unicorns (and I use his exact words) ‘the gift of death’.

There is an old tale, he relates, which tells how the unicorns were brought across the water from a hot and savage land to this moor which is now their home. It was here that God gave them his promise regarding death and here, also, that He decreed that the males should live together in the caves on the North knoll and the females in the caves on the South Knoll. These laws are still strictly observed today.

I ask if perhaps the God in the story had the appearance of a man. And Morav replies that he does not think so, and that God, should he have any appearance at all, would most likely to have the appearance of a unicorn, although he was no expert in these matters, and thought it better I ask one of the priests for confirmation of this.

I point out that it is only in the stretch between the males’ cave and the females’ cave – some two miles of open moorland – that the unicorns are killed, and Moorav says this is only natural, because they go nowhere else. He doesn’t think it surprising that unicorns should never die in their caves – this, after all, has always been the case.

The unicorns are beginning to appear stupid to me, but this only increases my desire to protect them from the wealthy industrials who come to hunt them.

I insist that they should guard themselves against the men who come to kill them, pointing out that God does not fire guns. They become more serious with this point, and I think perhaps I have made some progress. Moorav leaves the circle and goes to confer with others deeper in the cave.

To those remaining with me I say that if there is a God he certainly doesn’t use a gun. I begin to explain the nature of a gun, its mechanism. I take as my model the Lee Enfield .303 with which I have had some little experience. I draw it in the dust of the cave floor. I explain the nature of men’s war and allude to weapons more complex and more cruel than the one I have outlined to them. I give them details of man’s cruelties to man and to animals. I give, as examples, the slaughter of seals, the systematic murder of sheep and cattle, the subjection of horses, the killing of lions, the establishment of zoos and circuses.

Most of these animals, however, are unknown to them, although the lion is described in one of their legends.

I ask them what they eat. Mistaking this for a request, they bring me a meal: wild honey, brown bread, and milk. I ask them if they eat meat. They do not understand this. I sk them if they eat the flesh of animals. This is also taken for a request (although I stated, explicitly, that this was not the case), and they become troubled, talking to each other in whispers.

I continue my dissertation on the crimes of men but am interrupted by Moorav, who has returned with two of his fellows. He begs me to stop my talk. I reply that I am only concerned for their safety. He introduces his two friends, one of whom is a priest, wise in the ways and laws of God. The priest is old and has a white bear, something I have not observed in the others. I explain again, for his benefit, the nature of man, his need to kill other creatures, his consumption of their flesh.

At this point I find myself pinned on two sides by two unicorns, their huge flanks almost crushing my ribcage.

The priest is saying something about blasphemy.

I say, I have only come here to save you from death. I did not come to discuss theology, only facts. I ask them if the death of a unicorn is not always accompanied by a loud bang.

The priest says that this is so, but that there are also many bangs which do not signal a death.

I revert once more to a discussion of guns, ammunition, ballistics. The priest asks me how it is that the unicorns have never seen these instruments. I describe, once more, the deep trench that runs across the top of the ridge, and explain, again, that the men can kill from far away. I describe the way in which the unicorn’s head is removed and how it is mounted on the walls of the homes of rich men. I am becoming angry. They continue to whisper among themselves, not wishing to listen. Their accents, at first pleasant, seem to have become more rustic and so more stupid.

They also, it would appear, have become disenchanted with me. My clothes are ripped from behind. They force me, somehow, to a kneeling position and make me run on all fours, coming at me from all angles with their horns. They are calling me a blasphemer. There are tears in my eyes, but not caused by pain. A large unicorn sits suddenly on me, pushing my face into the dirt. My ribs have surely broken.

There is a searing pain in my side and a dull blow to my head. That is all I can remember on that occasion.

The hunters found me on the moor and, unaware of my missionary activities, treated me kindly, taking me to a nearby hospital where I was well looked after.

Upon my release, my right leg in plaster and my ribs securely taped, I returned to the moor, taking with me a rifle I had purchased. I would demonstrate to the unicorns the nature of the gun, and, with luck, arrange for them to make an exodus from the area to some more remote part of the moor where they might never be found.

I bore them no ill-will for the attack. It was the product of ignorance and I could expect no more.

Moorav was surprised to see me. However, neither he nor his followers were unkind to me. They fed me well and the priest came over and ate bread beside me asking if I had recovered. He referred to my behaviour as ‘your trouble’ and asked me if I was better.

I said I had brought an instrument that would prove me either right or wrong. The priest smiled and said he hoped I wasn’t about to start all over again. I indicated the gun and gave its name. He looked at it and asked some questions which I answered simply enough. They related more to the materials of manufacture than to the function.

After the meal I persuaded them to come with me to the door of the cave. Moorav was nervous, but I was insistent. With the unicorns standing in a semicircle behind me I raised the gun on my shoulder and fired across the moor.

Strangely, they were not impressed. The bang, they said was in no way like the bang of death, and for proof they pointed out that no one had, in fact, died. And they began, once more, to laugh at me. I, for my part, became angry and desperate that I should prove my point.

Eventually Moorav stepped forward and suggested that we should only settle the matter if I pointed the weapon at him. I said no, for it would kill him. He laughed once more and said I was fightened of failing. (I had noticed, on this second visit, that they treated me as a madman, perhaps having decided that I was ignorant but not dangerous. The charge of blasphemy was not raised again.)

Sadly I asked Moorav if he was prepared to die for the sake of his people.

He said, it was only the unicorns in pagan times who did not die, I am not frightened of dying.

I engaged in no calculations for I knew that, should I do so, I would never prove my point. I raised the rifle and pointed at his head. For an instant I hesitated, but the, with the unicorns behind me still laughing, i pulled the trigger. Moorav moaned and staggered. Blood rushed from the wound and his head sank slowly to the ground, his eyes rolling.

There was silence behind me. No one spoke.

I myself buried Moorav in a shallow grave. It was a slow process as the unicorns possess no digging tools, and they still expected that a man would come to remove Moorav, a man other than myself.

The cave has been quiet all day. Unicorns lie in groups but do not talk. Finally the priest approaches me and indicates that he wishes a word. He says I have done his people a grave disservice, that I had removed the gift of death from them. He says that hs people will now surely move to another part of the moor, as I had wished. There will be a return to the old times and no one will die. The unicorns, without Gods or enemies, will slowly sink into deep despair and spend their hours in search of sleep, where perhaps, they will dream of dying. They will forget, eventually, that dying was ever possible.

The priest now reveals that he has attempted to persuade the nicorns to remain where they are, but they are frightened and, should he put his authority to the test, they would not obey him. He asks me only one thing, that I should use my instrument on him. He would regard it as a great favour.

I load the rifle, sadly. Inside the cave the unicorns lie quietly, unaware that they will live forever.