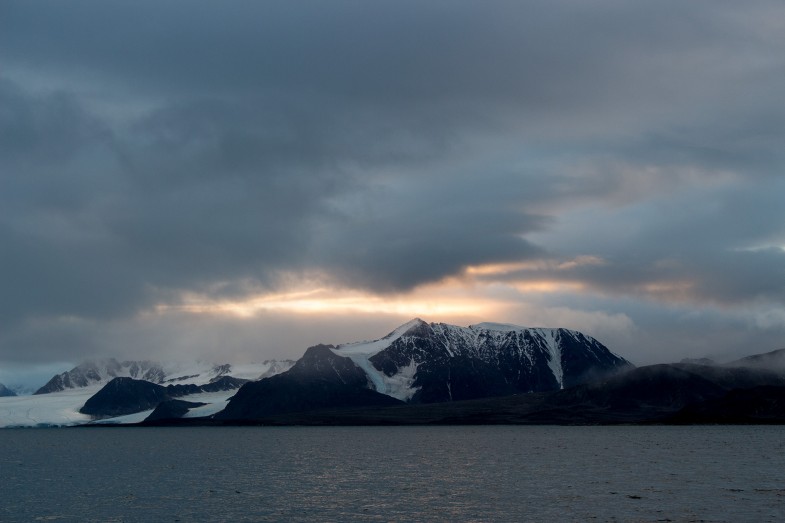 Having moored overnight at Ny Alesund we set sail bright and early to head further north – we were headed for the North West corner of Svalbard.

We wouldn’t make land today as we still had quite a distance to sail before we would reach the far north west of the archipelago. Fellow ship mate and photographer Oskar Landi took the opportunity of a day’s sailing to trawl the water in the fjords for micro-beads. He had brought with him a custom built device that he called The Acceptance that could be dragged behind the ship to collect the micro-beads he was looking for – should there be any.

Unfortunately the Go-Pro camera that Oskar had attached to The Acceptance got knocked off by a piece of ice in the water. This led to our first experience of a man overboard drill as we all took to the deck to try and spot the camera.

As we sailed north encountered a lot more wildlife and today’s leg of our voyage turned out to be a bumper day – although it didn’t start as one might hope! Our first animal encounter was with a dead sperm whale that had been washed into the fjord.

It was a sad sight but nature has it’s ways and the whale provided sustenance for other arctic creatures. We spotted a bright white polar fox lurking in the rocks just up from the shoreline which had undoubtedly been making the most of the feast that had washed up here.

As we rounded the headland we then caught sight of a polar bear!

Being as polar bears are very much the icon of the arctic regions there had been much talk of them and our chances of seeing one during our voyage.

You can see from my shaky camera footage above that we didn’t get too close to the bear. This was in part because we wouldn’t want to be attacked but primarily so as not to disturb it.

It was a magical moment seeing the bear in the wild here. Having spent a considerable amount of time tracking the polar bear along the coast we finally dropped the anchor at Virgohamna from where we could see a herd of walruses basking on the shore. They looked content and paid no attention to our arrival.

We ended our safari of the arctic circle by taking a zodiac cruise around the bay where we were able to get up fairly close to a pod of harbour seals. Whilst we had been out in the zodiacs we had spotted an old trappers hut (Torsbu) on one of the small islands that we travelled around called Æøya.

Shipmate and writer Jess Arndt had a chat to the Captain and our guides and arranged to stay in the hut overnight.

The trappers huts are only very small cabins and so there would only be room for Jess and an armed guard. Of course a lot of us were quite envious and were wishing that we had come up with the idea that we might overnight in a trappers hut. To help us feel some sense of Jess’ experience it was arranged for her to deliver a short radio broadcast back to us on the ship using the guides’ walkie talkies.

It was a surreal experience sending Jess off into the dark. It felt like we were sending her on a journey that was much greater than the few hundred metres from the ship to the island – and in many ways I’m sure that was true!