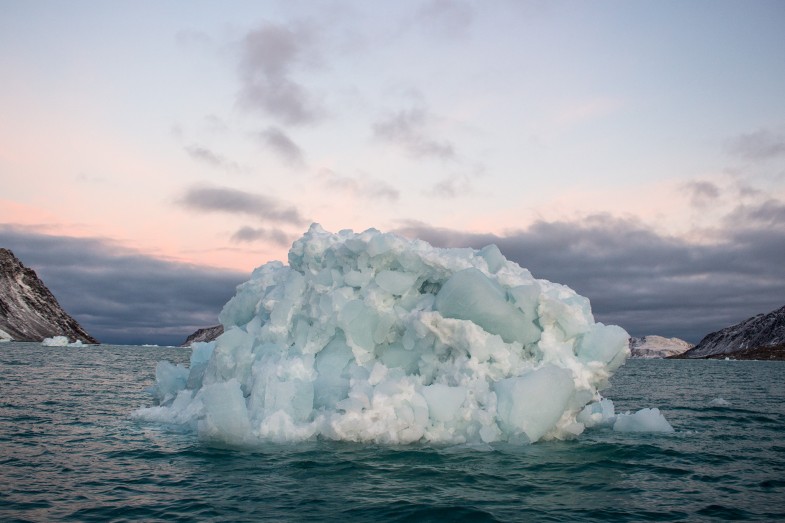 Having anchored in Fuglefjorden overnight we had another opportunity to explore the area around the fjord and the magnificent Svidjotbreen glacier.

I got off to an early start as the guides had organised an early morning pre-breakfast zodiac cruise around the fjord for us. It was magical to be out on the water amongst the ice in this early morning twilight. The water was exceptionally still and and little could be heard other than the cracking of the ice in the water and the distant thunderous rumble of a calving glacier.

The morning was spectacular. The sun lit the sky up in shade of pink and purple as you can see in the photograph above. After breakfast I took to the water in a zodiac again whilst many of the photographers took to Spikeholmen in order to capture some shots of Svidjotbreen in the wonderful light. Exploring the waters was fascinating and being out on the water made me feel much smaller in the landscape than being up on the deck of the ship, or on the shore. There were icebergs of varying shapes and sizes floating all around us – no doubt the result of previous calvings of the glacier.

What with the incredible light and this most sublime location I must have taken more photographs this morning than during the entirety of the rest of the voyage! – Trying to describe my experience of this place is futile really because there aren’t the words to do it justice. As our expedition continued the days were getting shorter and were entering into ‘Dark Time‘ – this was the first day that we never saw the sun as it never rose high enough in the sky.

After an incredible morning in and around the fjord we took up the anchor and set sail once again. The end of the voyage was nearing and so we were headed south this afternoon before anchoring at Julibukta.

The day was rounded of with glögg (mulled wine) provided by the Glacial Risk Management Institute on deck with a dodgy disco light which was an experience in of itself.