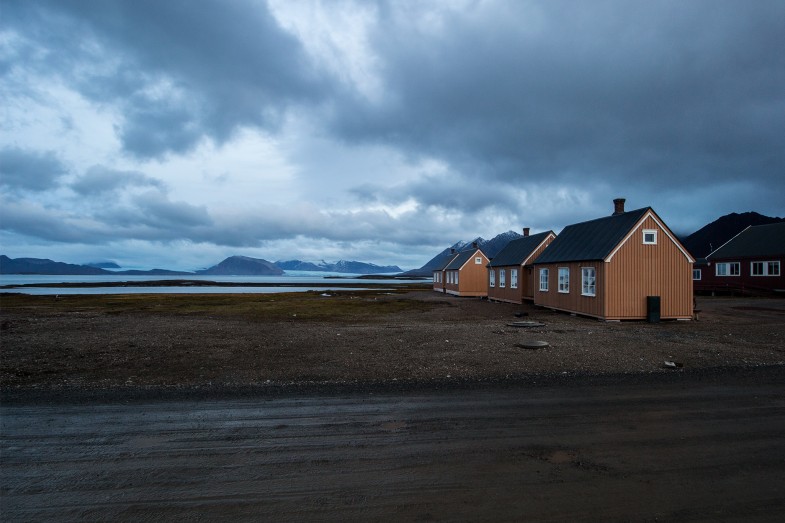 Having spent the previous afternoon embroidering in the arctic landscape our guide led a group of us on a hike up the mountainside alongside the Blomstrandbreen glacier.

Climbing up to the top of the mountain gave us some extraordinary views of the glacier. Looking down on the glacier we were able to clearly see the dark stripes through the ice from where two glaciers had come together and sandwich the moraine between them.

We were also able to see the point at which the glacier started at the top of this mountain and got a phenomenal view down on the top of the ice. Following our morning hike we took up the anchor and set sail for Ny Ålesund – the world’s northernmost permanent human settlement.

This was an important stop for us as there had been issues with the fresh water maker on board the ship so mooring at Ny Ålesund would allow the captain to replenish the fresh water supply before we headed further north. Having not seen sight of any human settlement for a good week or so it was a somewhat surreal experience docking at Ny Ålesund. It’s only a very small settlement – a village really – but having spent the rest of the journey so far out in the open landscape it felt like we were wandering through a veritable metropolis!

We had an opportunity to visit the mast from which Amundsen and Nobile launched their attempts to reach the north pole. Having visited the mast we were left to our own devices. I had a wander around staying within the settlement’s limits – we were instructed not to walk beyond these limits due to the risk of polar bears! All of the buildings in Ny Ålesund are unlocked so that if a polar bear does wander in from the surrounding landscape then anyone in the town can take shelter quickly and easily. Fortunately this means that the museum is open all year round 24-7 so I made the most of it and spent some time finding out about the history of the town.

Unsurprisingly the settlement was more or less deserted. Apparently there are only around 30 inhabitants who reside in Ny Ålesund for the entire year and winter was drawing in. The town is primarily an international research centre and is home to research institutes from ten different countries. As winter, and the long dark polar nights that it brings, was approaching most of the scientists who work here had left. As had become customary on our voyage I spent the evening out on deck with a wee dram looking up at the stars. It was another clear night and it wasn’t long before the Northern Lights started to dance across the sky for us again.

I hadn’t managed to take any photographs of the Northern Lights up until now since the ship was constantly moving when we were anchored at sea. However, since we were moored at Ny Ålesund I was able to step onto the dock with my camera and capture my first photograph of the lights as they danced over Ny Ålesund.

One thought on “Blomstrandbreen to Ny Alesund”